British African-Caribbean (or British Afro-Caribbean) people are residents of the United Kingdom whose ancestors were primarily indigenous to Africa. As immigration to the United Kingdom from Africa increased in the 1990s, the term has sometimes been used to include UK residents solely of African origin or as a term to define all Black British residents, though the phrase African and Caribbean has more often been used to cover such a broader grouping. The most common and traditional use of the term African-Caribbean community is in reference to groups of residents continuing aspects of Caribbean culture, customs and traditions in the UK.

The African-Caribbean population in the UK come from the Islands in the British West Indies such as Jamaica, Trinidad and Tobago, Saint Kitts and Nevis, Barbados, Grenada, Antigua and Barbuda, Saint Lucia, Dominica, Montserrat, Anguilla, Saint Vincent and the Grenadines, Guyana (which although located on the South American mainland is culturally similar to the Caribbean and was historically considered to be part of the British West Indies), and Belize.

African-Caribbean communities are present throughout the United Kingdom’s major cities, the UK Census identified the largest concentration is in Birmingham followed by London.[1] Manchester, Bradford, Nottingham, Coventry, Luton, Slough, Leicester, Bristol, Gloucester, Leeds, Huddersfield, Sheffield, Liverpool and Cardiff. In these cities, the community is traditionally associated with a particular area, such as Brixton, Harlesden, Stonebridge, Hackney, Lewisham, Tottenham, Peckham in London, West Bowling and Heaton in Bradford, Chapeltown in Leeds, St. Pauls in Bristol,or Handsworth and Aston in Birmingham or Moss Side in Manchester, St Ann’s in Nottingham and Toxteth in Liverpool. According to the 2011 UK Census, the largest number of African-Caribbean people are now found in Croydon, South London.

With the intention of stimulating debate about the development of better and more internationally applicable terms to describe ethnicity and race, suggests a definition of Afro-Caribbean/African Caribbean as, “A person of African ancestral origins whose family settled in the Caribbean before emigrating and who self identifies, or is identified, as Afro-Caribbean (in terms of racial classifications, this population approximates to the group known as Negroid or similar terms)”. A survey of the use of terms to describe people of African descent in medical research notes that: “The term African Caribbean/Afro-Caribbean when used in Europe and North America usually refers to people with African ancestral origins who migrated via the Caribbean islands”. It suggests that use of the term in the UK is inconsistent, with some researchers using it to describe people of Black and of Caribbean descent, whereas others use it to refer to those of either West African or Caribbean background

The British Sociological Association‘s guidelines on ethnicity and race state that “African-Caribbean has replaced the term Afro-Caribbean to refer to Caribbean peoples and those of Caribbean origin who are of African descent. There is now a view that the term should not be hyphenated and that indeed, the differences between such groups mean the people of African and Caribbean origins should be referred to separately”.style guide prescribes the use of “African-Caribbean” for use in the two newspapers, specifically noting “not Afro-Caribbean”.

Sociologist Peter J. Aspinall argues that the term “Black” has been reclaimed by people of African and Caribbean origin in the UK, noting that in a 1992 health survey, 17 per cent of 722 African–Caribbeans surveyed, including 36 percent of those aged 16 to 29, described themselves as “Black British“. This, he suggests, “appears to be a pragmatic and spontaneous (rather than politically-led) response to the wish to describe an allegiance to a ‘British’ identity and the diminishing importance of ties with a homelan Caribbean”.

Victims of Windrush scandal invited to advice session in Telford

Victims of the Windrush Scandal will get advice at a public meeting in Telford. 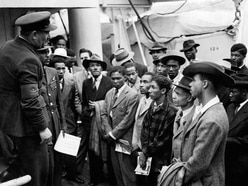 The meeting will take place on September 17 / 2019  in order to assist those who need help in documenting their status in the UK, as well as advice about compensation.

The scandal jeopardised the status of many people who arrived in the UK from the Commonwealth after the Second World War. People who had been born British subjects, particularly from Caribbean countries, were wrongly detailed or threatened with deportation.

The meeting is being hosted by the Midlands-based Windrush Movement (UK) along with local community activists from Telford and in association with the Home Office.

Representative from the Windrush taskforce will be on hand to assist those who have status queries, alongside member from the compensation scheme.

Reverend Dr Desmond Jaddoo, chair of the Windrush Movement (UK), said: ”We have hosted several of these meetings in various parts of the country and we feel that it is essential that we reach those who are particularly under the radar to come out without fear in order that we may assist them.

“They have our assurances that this is a safe environment for them to do so, and the only purpose is to assistance those in need.”

The meeting will take place at Ketley Community Centre, in Holyhead Road, from 5-8pm on September 17.

The public meeting is open to anybody.

Among those affected in the region was Paulette Wilson, a Jamaica-born but Telford-raised grandmother who was detained twice despite having been in the country from the age of 10.

Ms Wilson, who now lives in Wolverhampton, wrote a letter to the Government stating: “Please help me, this is my home.”

In January last year she was told she could stay in England and The Paulette Wilson Windrush Citizenship Project was launched to help people like her who had been incorrectly identified as illegal immigrants.

Speakers on the night will include Reverend Jaddoo and Rachel okello, director of Rogols immigration solicitors.

For more information about the meeting call 07946 374577 or email thewmuk@yahoo.com